Bollywood actors Vicky Kaushal and Katrina Kaif recently took off with friends and family to Maldives where they celebrated Katrina’s 39th birthday. The two have been treating fans with stunning pictures of themselves enjoying the fun getaway. 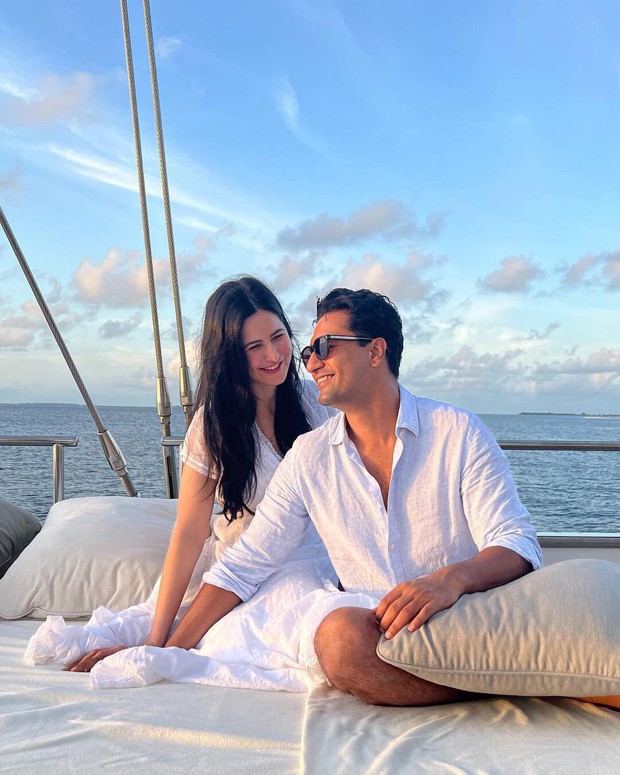 Vicky Kaushal twins in white with Katrina Kaif on her birthday trip in Maldives, see photo

In a recent post shared by Vicky on Instagram, he finally shared a picture with his wife Katrina Kaif, who turned 39 on July 16. The picture is clicked on a yacht and the couple can be seen twinning in white. The all-white picture has the couple smiling. Vicky shared the photo with an infinity sign. The comment section is flooded with heart-eye and love emojis by fans.

Katrina and Vicky were spotted at Mumbai airport on July 15.They were accompanied by Vicky’s brother Sunny Kaushal and his rumoured girlfriend Sharvari Wagh. Filmmaker Kabir Khan and wife Mini Mathur are also holidaying with them.

Previously, Katrina posted a string of pictures with her girl gang from Maldives on her birthday. Iliana D’Cruz, Angira Dhar, director Karishma Kohli and Katrina’s younger sister Isabel Kaif were all seen in the photos. Vicky’s brother Sunny Kaushal also shared an image with his sister-in-law on Instagram.

Meanwhile on the work front, Katrina will be next seen in the horror-comedy Phone Boothwhich also stars Ishaan Khatter and Siddhant Chaturvedi. Directed by Gurmmeet Singh, the film will release on November 4. She also has Salman Khan starrer Tiger 3 and Merry Christmas with Vijay Sethupathi.

On the other hand, Vicky will be next seen in Sam Bahadur. He also has untitled films with directors Laxman Utekar and Anand Tiwari respectively. He is also a part of Shashank Khaitan’s comedy film, Govinda Naam Mera.