TOMORROW X TOGETHER (SOOBIN, YEONJUN, BEOMGYU, TAEHYUN, and HUENINGKAI) made history as the first K-pop group to perform at Lollapalooza, taking over Solana x Perry stage on July 30. 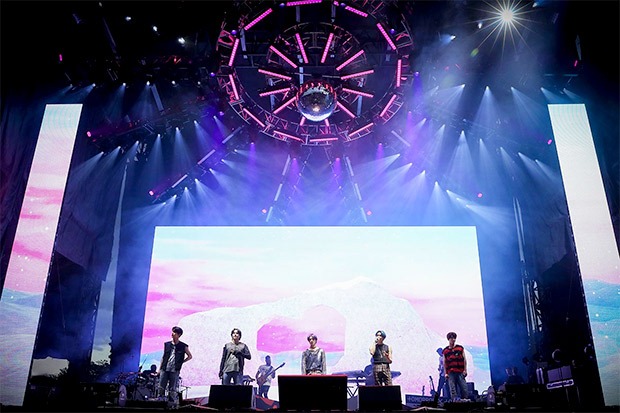 After performing their beloved hits ‘Good Boy Gone Bad’ and ‘Frost‘, TOMORROW X TOGETHER said, ‘It’s so nice to finally meet you all here at Lollapalooza. We’ve been dreaming of this stage for a long time. We started our world tour in Seoul and performed across seven cities in the States this month, and we’re ecstatic to wrap up our U.S. shows here at Lollapalooza.”

TOMORROW X TOGETHER thrilled the crowd with their never-before-seen epic live band performances with their powerful vocals fusing seamlessly. The act kept the energy high with their first English track, ‘Magic‘ and ‘Thursday’s Child Has Far To Go‘ along with the emotive and captivating performances of ‘Anti-Romantic‘, ‘LO$ER=LO♡ER‘ and ‘0X1=LOVESONG (I Know I Love You)’ feat. Seori.

Thank you! Lollapalooza!
With warm cheers and loud shouts
I’m getting a lot of energy!✊????✊#TOMORROW_X_TOGETHER#Lollapalooza #lola #Lolla2022 #TXTPALOOZA pic.twitter.com/vijLxGDojy

Additionally, a surprise appearance from a special guest elicited joyous reactions from the crowd. TOMORROW X TOGETHER said, “We had a chance to release new music with amazing American artists this year, bringing out their fellow Gen-Z artist iann dior to stage.” With the crowd roaring, TOMORROW X TOGETHER and iann dior performed their newly-released single ‘Valley of Lies’ (feat. iann dior) while showing off the the viral #ValleyofLies challenge dance move created by YEONJUN.

Prior to the start of their set, the packed-out crowd chanted “TXT” in anticipation of their performances. As soon as the set began, the whole crowd jumped and sang along in unison to the band’s songs including “Magic” and “Anti-Romantic” while putting up the hand-sign ‘L’ during “LO$ER=LO♡ER” choreography.

TOMORROW X TOGETHER said, ‘The crowd here is absolutely amazing. We’ll never forget this moment. Just like the meaning of our name TOMORROW X TOGETHER, we look forward to meeting you here again’, closing the set with a heartfelt farewell message.

On the heels of their highly successful festival appearance, the band completed the U.S. leg of their first-ever world tour ‘TOMORROW X TOGETHER WORLD TOUR IN U.S.’ in July, selling out the total of eight shows across seven cities in the United States.

ALSO READ: Tomorrow x Together to release a new single ‘Valley of Lies’ in collaboration with iann dior on July 22, 2022