Specialized firefighting vehicles rolled into Berlin’s Grunewald forest on Friday to take on an ordinance site blaze that presented a tricky challenge. Included were armored vehicles, tanks and firefighting robots.

Berlin’s fire department deployed an array of specialized equipment to the forest where a blaze tore through tinder-dry woodland.

Initial efforts to put out the fire had been hampered because of explosions at the site, on the edge of the German capital, where munitions were being stored.

How is the blaze being tackled?

Firefighters on Thursday set up a cordon of a kilometer (more than half a mile) around the original fire, poised in ring formation to tackle the blaze as it spread.

Later in the day, the first work to tackle the blaze within the restricted area took place. Included in the list of equipment used to minimize risk and maximize firefighting efforts were armored vehicles and Bundeswehr tanks. 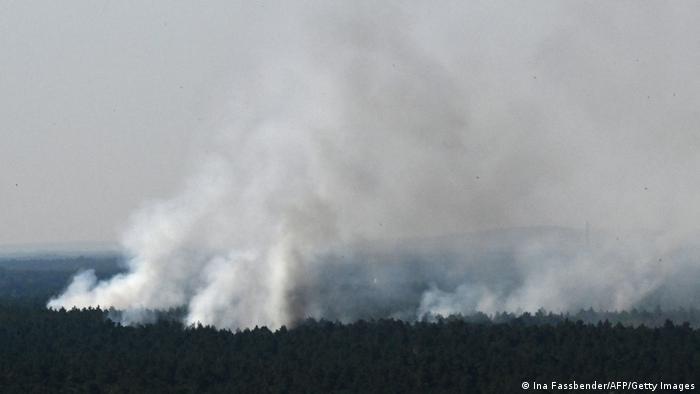 Emergency vehicles were able to advance to within 500 meters of the ordinance site area.

The 200 by 200 meter compound is used by Berlin’s explosive ordnance disposal service to store, defuse and detonate munitions — primarily those still being discovered to this day after World War II.

Before the vehicles went in, the site was checked from the air using drones, satellite imagery and helicopters. A thermal imaging camera was used to yield further clues into how the blaze could be tackled.

Firefighting efforts to continue throughout the day

The fire department has put into use “almost everything there is in Germany in terms of technology,” said spokesman Thomas Kirstein. Military experts and personnel are also on had to provide help.

The fire service spokesman said wildfires around the dump had been largely extinguished, with some 150 firefighters still on duty at the site on Friday morning. Firefighting efforts were expected to continue throughout the day.

Kirstein said an assessment was still being made about how dangerous the situation at the compound itself. This would determine whether firefighters could enter the area and whether nearby closed rail lines and a stretch of highway known as the AVUS could be reopened.

The site was set up in Cold War-era West Berlin in 1950, with 25 metric tons or more of fireworks, World War II ammunition and other explosive ordnance stored there before the fire began.