As many Utahns know, there’s an official and unofficial line of demarcation at the Salt Lake County-Utah County line.

It stops some students from considering enrolling at the University of Utah. It may inhibit U graduates from applying for jobs in Utah County south of the Silicon Slopes corridor. And due to state law, it literally blocks the university from establishing a satellite campus outside Salt Lake County.

This week, University of Utah President Taylor Randall and other campus leaders crossed that boundary to make the case for the U in unexpected territory. 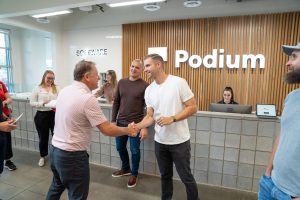 “We’d love to have more red down here,” Randall told executives of digital services company Podium at the first stop of the day-long road trip.

On the third leg of his statewide Utah Across Utah tour, Randall, a group of U leaders and State Commissioner of Higher Education Dave Woolstenhulme traversed Utah County from Lehi’s tech center to the BYU Creamery in Provo and back to the Point of the Mountain. They met with elected leaders from Utah County to discuss developing satellite campuses; talked internships and recruitment with executives from Podium and essential oils and wellness company doTERRA; explored Geneva Rock’s sustainability innovations; and wrapped up with an overview of “The Point” and a higher education “hub” at the former Utah State Prison site in Draper.

At Utah County businesses, the conversation focused on placing U students in internships—through summer intensive programs including the Kahlert Initiative on Technology—and facilitating businesses’ recruitment efforts once they graduate.

“It’s so much more difficult to hire people than it was four or five years ago. A lot of companies have realized there’s a lot of great talent here in Utah,” said Eric Rea, Podium founder and CEO. “The No. 1 thing you could do is increase [computer science and engineering graduate] capacity. We’ve had to start hiring engineers from Brazil. It would be a lot easier for us to hire from here.”

In turn, Randall had a request: Please support the university’s bid for state funding to complete a new computer science building, he asked Podium’s founders. Donors John and Marcia Price have provided a leading gift of $15 million for the 209,000, six-story building. But the project’s $120 million price tag will require legislative and industry support.

The U educates 46% of the state’s computer science and computer engineering graduates, Randall noted, but “we have students sitting the aisles of our auditorium right now.”

A letter from Podium could help prioritize the classroom and office building project during the upcoming 2023 Utah Legislature, the president added. 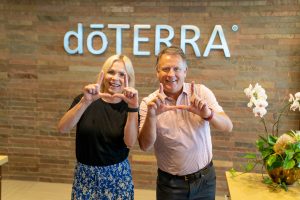 At doTERRA, company executives including CEO Corey Lindley and General Counsel Mark Wolfert, said the company would like to develop an internship pipeline from the U.

“We always want to hire the best,” Lindley said. “We’re always looking for avenues to identify those students as interns and then hire them as scientists and business executives.”

Human Resources Director Chris Farnsworth said the company is hoping to push past the imagined barriers at the county line and expand its workforce with Salt Lake County residents. As part of that effort, doTERRA executives are pushing to get a Frontrunner train stop nearby and provide transit passes to workers. About 20 percent of doTERRA’s employees work remotely.

“We’ve done a little bit of recruiting at the U, but we’d like to do more,” Farnsworth said.

Finally, the university executives met with elected officials from Provo City, Utah County and the state legislature to discuss breaking down the existential barriers between the U and Utah Valley—traditionally the stomping ground of arch sports rival Brigham Young University.

“We’re not afraid of competition,” Randall said. “We’re here to increase the reach and expand the impact of the state’s flagship university. But we plan to lead with humility.” 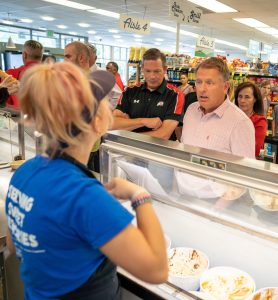 Deep within BYU Cougar country, there was some skepticism.

“You say you want to lead with humility, but there are some folks down here who may say, ‘I don’t think I want the University of Utah in my community’,” said State Rep. Keven Stratton, R-Orem. “How do we bridge the gap between those biases that have existed historically?”

Randall said the university will not shy away from having open discussions about cultural differences and sensitive topics, including academic freedom and free speech on campus.

“Even at the University of Utah, we struggle with honest dialogue,” he said. “Hopefully, you’ll see us leading out.”

State Sen. Michael Kennedy, R-Alpine, grabbed a U baseball cap on his way out. “It’s been a rare opportunity for us to have you here in our backyard,” he said. “Thank you.”