Many hardware-focused stocks in the technology sector posted a quiet stream of solid gains in July 2022, adding up to monthly price increases of 16% or more. Here are three illustrative examples, based on data from S&P Global Market Intelligence.

The hardware stocks listed above floated higher in July without making headline-worthy waves. I’m not saying that they practiced total radio silence. Two of the three companies reported quarterly results in July, and their press departments churned out the usual volume of product announcements and partnership deals. It’s just that none of these company-specific developments fueled the fires under these stocks last month.

For example, the U.S. Federal Communications Commission (FCC) opened another auction for 5G wireless spectrum licenses near the end of July. That’s great news for Skyworks, whose signal-processing chips can be found in 4G and 5G base stations and end-user devices around the world. But the stock moved just 1.1% higher that day, lagging behind the S&P 500’s 1.5% jump.

Cable and antenna maker Amphenol also reported results the same day. The company delivered double-digit percentage gains in revenues and earnings compared to the year-ago period. The results also exceeded Wall Street’s expectations across the board. The report triggered Amphenol’s largest single-day jump of the month, but this event still accounted for less than half of the stock’s monthly gains.

Glassware veteran Corning reported robust second-quarter results earlier that week. Sales and earnings were broadly in line with expectations, but third-quarter guidance was modest due to inflationary concerns and weak demand for products such as smartphone screens, car windows, and solar panels. Investors shrugged off the somewhat gloomy guidance and drove share prices 2.9% higher that day, while the S&P 500 rose by 2.6%.

Again, these individualistic events were not the main fodder for this trio of July jumps. The hardware experts on my list had taken massive price cuts in the first half of 2022, setting them up for dramatic rebounds on the slightest hint of positive market news. 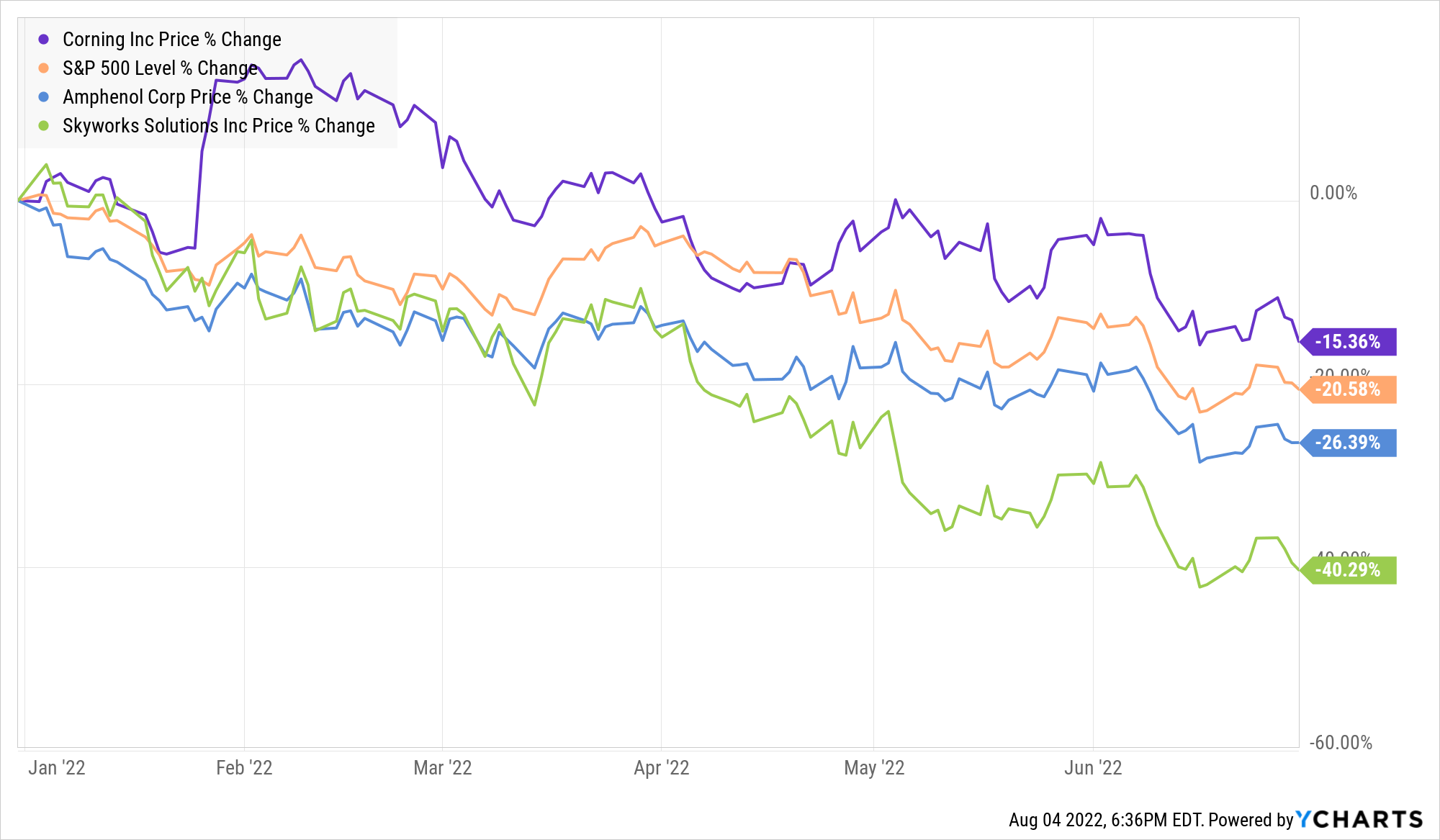 The relentless downward pressure of early 2022 turned into mild optimism in early July. Later in the month, the mood brightened even further due to a trickle of positive earnings reports and economic metric readings. The same growth stocks that had taken punishing price cuts in the previous six months were primed to bounce back. That’s the grand backdrop behind July’s booming returns for investors in Corning, Skyworks, and Amphenol.

Will the higher prices stick or are we waiting for the bear market to resume? Only time will tell, of course, but the root causes of the first half’s price drops are starting to fade. Core inflation rates ticked down modestly over the last three months, the semiconductor industry is showing signs of a healthier manufacturing pipeline, and shipping costs have started to drop again. Furthermore, the U.S. government is taking action to support the domestic semiconductor industry and related businesses. That doesn’t happen every day (hardly even every decade), and all three of these hardware stocks stand to benefit from that initiative.

The bullish trend could always hit another snag, but things are moving in the right direction. The hardware makers on my list can be seen as canaries in the coal mine, currently chirping up a storm to show their excellent health.