Stop trying to make Polywork happen. It’s already happening. You may even be polyworking as you read this.

Polywork is a venture-backed startup that is building a professional network to help people express their multihyphenated work lives. In other words, if you’re a reporter, who also podcasts, wants to write a book and would love to one day help teach at a university, Polywork wants to give you, well me in this case, a place to express that. And according to CEO and founder Peter Johnston, the name purposefully sounds like a verb “that kind of works.”

Polywork announced today that it has raised a $28 million in Series B funding co-led by former GitHub CEO Nat Friedman and Caffeinated Capital. Other investors also participated in the round, including Instacart CEO Fidji Simo and the founders of Instacart, Stripe, Lyft, Clubhouse, Lattice, Minted and Divvy Homes. Andreessen Horowitz, which led Polywork’s $13 million Series A financing also participated in the round but did not lead.

The round marks Polywork’s official launch out of private beta. While Polywork founder and CEO Peter Johnston declined to share specific user numbers, beyond the fact that they’re growing, it shows confidence in the platform’s ability to provide a spot for users to express themselves. 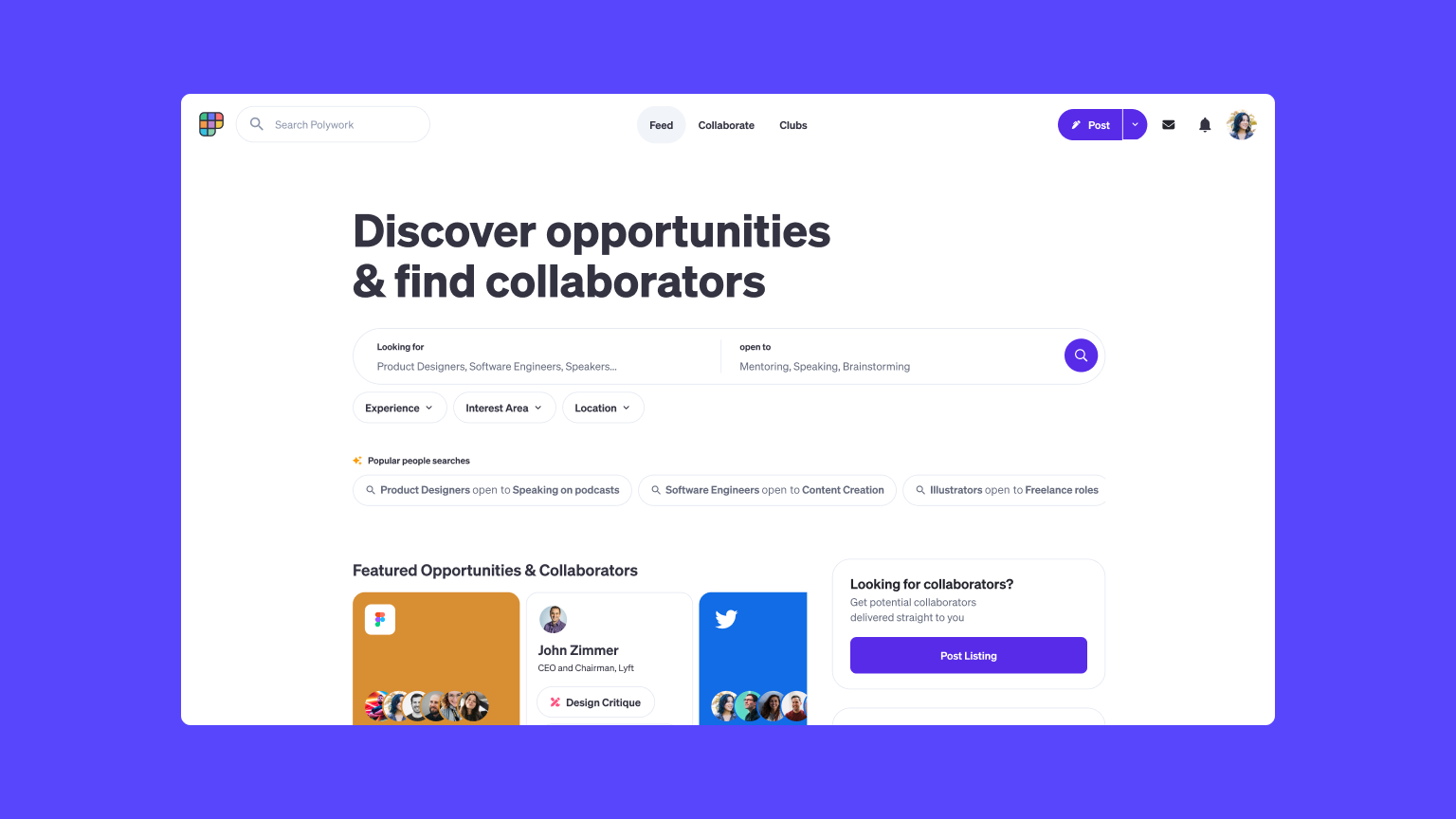 In other words, the startup believes it has found product-market fit. Since first launching, Polywork tracked who signed up to better understand what they want to do — beyond self-expression — once they got to the website. The call to action, Johnston explains, soon became helping people find opportunities to collaborate with each other.

Not all features will be open to the public. For example, Polywork is launching Clubs into private beta, a dedicated group space designed to help people collaborate. Think of a group of people brought together by a badge-based entry and proof of experience. Per Polywork, there will be a moderator that facilitates collaboration in the groups.

The company’s early users are mostly people who work in tech full time, looking to broaden their part-time jobs as angel investors, podcasters or newsletter writers. The founder explained that some view the rise of multihyphenated jobs as just another example of glorifying hustle culture. To that he said, “This generation of people absolutely gets energy from doing more; it’s not tiring them out or burning them out.” Meanwhile, some reports show that millennials and Gen Z workers are reporting the highest rates of burnout, at 59% and 58%, respectively. Other reports claim that more Americans are taking on second jobs to combat inflation, not so much their passion. At the same time, more than 50 million people, according to Fast Company, consider themselves creators.

The clashing trends provide nuance on both the demand for a more fluid professional network and the realities that make multihyphenated jobs more prominent.

“Their expertise afforded them the ability to try those multiple things at once,” Johnston said. “A lot of things do come back to money and people wanting supplemental income, but it actually started more with people needing and wanting energy from it — and breaking up the fact that they were working during the pandemic … this enables them to try something new in a lightweight way.”

Polywork has no revenue plans as it focuses more on growth and product. Future monetization may look like customization of user Polywork templates or around advanced search similar to LinkedIn premium.

Polywork is facing the same challenges that any marketplace might. If its value proposition is more collaboration opportunities, how does it onboard not just the people who want a book agent but also enough book agents to make perusal even an option? Everyone may be in search of a podcast co-host, but what if everyone has their own idea and doesn’t necessarily want to join forces with another?

The future of collaboration is fruitful yet complicated. But, smartly, Polywork is branding its focus as a career network focused on the future, tapping into people’s hopes and dreams beyond the past or simply the present.