A 200-meter Telecom Building in China’s Changsha fell prey to a massive inferno on Friday afternoon. The terrifying images of the fire as a dozen stories of the skyscraper were engulfed in the fire have caused quite a stir on the internet. The videos shared online of the catastrophic fire that engulfed the 200-meter building showed massive plumes of thick black smoke as flames erupted from the entire height of the building. The Telecom building is situated in the capital of the Southern Hunan Province. Read along to know more about the fire. 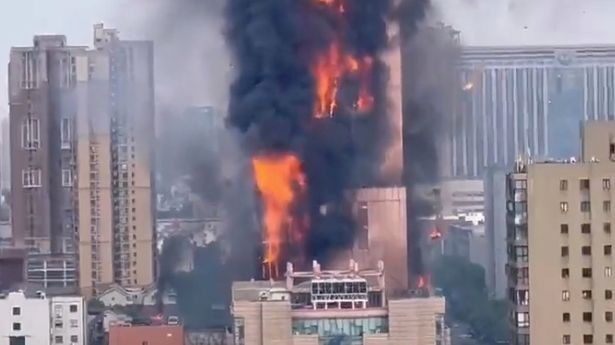 The What and Why

As per the reports from the State media, the situation was soon under control and the fire was extinguished. The Hunan fire department also added that they were no casualties to be found. The reports from the Singaporean CNA state that in the light of preliminary investigations, the cause of the fire might be the outer wall of the 42-story tower catching fire.

Videos of the fire have been doing their rounds on Twitter and it has elicited quite a number of reactions and responses from the denizens of Twitter. One particular video shared on Twitter shows people inside the building rushing to the exits during the initial stages of the fire. An official statement released by China Telecom has confirmed that the fire has been extinguished and that there are no casualties, “By around 4:30 p.m today, the fire at our No. 2 Communications Tower in Changsha has been extinguished. No casualties have yet been discovered and communications have not been cut off.”

Let us flip through a couple of reactions and responses on Twitter.

Chinese state media outlet China Telecom claimed no casualties have been found yet after a ferocious fire smothered their 42-floor skyscraper housing in the city of Changsha Friday.

The building did not collapse like the WTC. pic.twitter.com/tKFyAj5KlJ

[🔥] Trending!
According to CCTV news, on the afternoon of September 16, a fire broke out in the China Telecom Building in the urban area of ​​Changsha, Hunan Province. At present, the casualties are unknown & firefighters have launched fire fighting and rescue work at the scene pic.twitter.com/XA6ePvbrmV

Half an hour ago in Changsha, Hunan, a China Telecom building caught fire.

The company states employees have been evacuated pic.twitter.com/55m7pAR3Mv

In China, the China Telecom building in the city of Changsha completely burned down in 20 minutes
The fire engulfed the 200-meter office tower, which, according to journalists, stored 35 tons of fuel for servers 😳 pic.twitter.com/YGFmk9CINp

❗️In #Chinathe skyscraper of the largest telecom operator China Telecom in #Changsha is on fire. Hundreds of people could be burned alive. pic.twitter.com/GDNC74k8Tj

NOW: China-telecom 656ft sky scraper burned for over 20 minutes. It’s said, 35 tons of fuel for servers were stored there.

Still, can’t help but notice the building didn’t collapse into itself at free fall speed.pic.twitter.com/jrxdpbsGlV