Rashmika Mandanna, one of the most well-known actors in the South film industry, is set to make her Bollywood debut with the forthcoming family drama Goodbye. As she is on a promotional spree for the movie, the Pushpa star is travelling across cities. As she landed in Delhi to promote her film, Mandanna treated herself to a massive desi meal.

Rashmika Mandanna is keeping her Instagram followers updated about her whereabouts as she promotes her film. Taking to her IG stories, the 26-year-old gave a sneak peek into her lunch diaries from a hotel in Delhi. In the photo, the actor could be seen sitting in a white robe as she had many dishes placed on a table in front of her. Happiness was evident on Mandanna’s face as she smiled while spreading both her hands. Sharing the photo, the actor wrote, “when in Dilli… let’s hog on – dal makhani, butter chicken, paneer bhurji, seekh kabab, makai di rotti, dahi kabab…” “Okay I ordered a lot…,” she added. 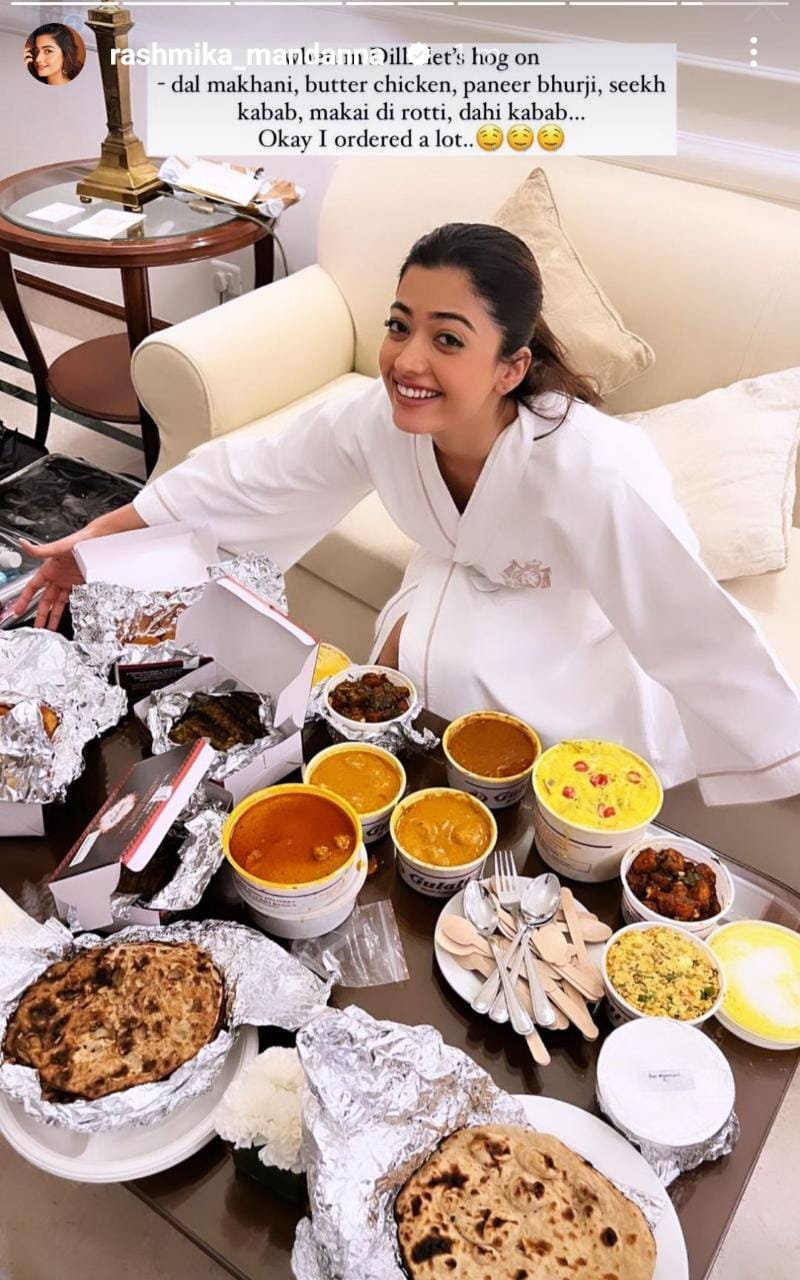 Rashmika Mandanna will share screen space with legendary Bollywood star Amitabh Bachchan in the upcoming family drama Goodbye. The actor will play Big B’s and Neena Gupta’s daughter, who questions the rituals after her mother passes away. The film will also see Sunil Grover, Pavail Gulati, Shivin Narang and Ashish Vidyarthi playing pivotal roles. Helmed by Vikas Bahl, the film will see an estranged family, which comes together after the loss of an important member. The film is set to hit the theatres on October 7, 2022.

Apart from Goodbye, Rashmika Mandanna has two more Hindi projects in her kitty. She will be seen playing the leading role opposite Sidharth Malhotra in the upcoming film Mission Majnu. The actor will also share the screen space with Ranbir Kapoor in Sandeep Reddy Vanga’s directorial Animal. The film will also star Anil Kapoor and Bobby Deol playing pivotal roles.

Rashmika will also reprise her role as Srivalli in the much-awaited Allu Arjun-starrer Pushpa: The Rule. The Sukumar directorial is currently in the works. She will also share screen space with Vijay in Varisu.