The makers of Saif Ali Khan & Hrithik Roshan starrer Vikram Vedha are leaving no stone unturned in the film’s promotions. Following the trailer release, the first song ‘Alcoholia‘ was launched at Mumbai’s biggest single-screen cinema Gaiety-Galaxy on Saturday in the presence of fans & directors Pushkar & Gayatri, cast members Rohit Saraf, Radhika Apte and Yogita Bihani along with producers Shibasish Sarkar from Reliance & S. Sashikanth from Y-Not Studios. Now, taking a step further, the film will have premiere shows in the US. 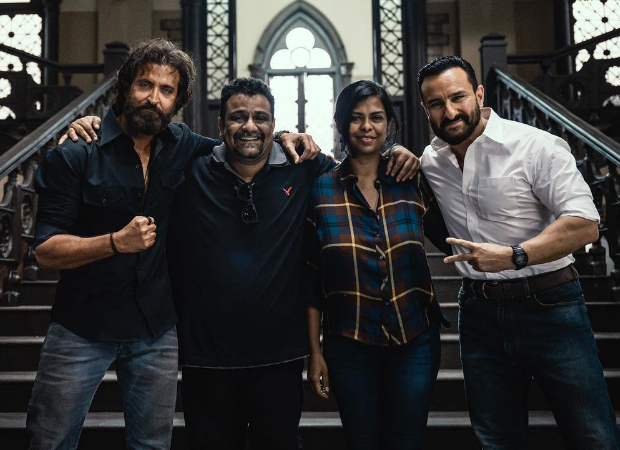 With anticipation around the Hindi remake soaring, Hrithik Roshan and Saif Ali Khan starrer Vikram Vedha is set to have US premiere shows on September 29. It seems like Ranbir Kapoor and Alia Bhatt’s Brahmastra has set a trend at the box office in the US for Hindi films. Following the same, Vikram Vedha will also get similar treatment.

In a record 100-plus countries globally, the film will have the largest international distribution for a Hindi film. The film has sparked worldwide curiosity and appeal ahead of its release. Apart from the major markets like North America, the U.K., the Middle East, Australia and New Zealand, the film is set to release in 22 countries across Europe, 27 countries in Africa and also non-traditional countries like Japan, Russia, Israel and Latin American nations such as Panama and Peru.

Vikram Vedha is an action-thriller written & directed by Pushkar-Gayatri. The story of Vikram Vedha is full of twists and turns, as a tough cop Vikram (Saif Ali Khan) sets out to track and chase a dreaded gangster Vedha (Hrithik Roshan). What unfolds is a cat-and-mouse chase, where Vedha – a master storyteller helps Vikram peel back layers through a series of stories leading to thought-provoking moral ambiguities.

ALSO READ: ‘Alcoholia’ song launch: “Doctors had told me before Kaho Naa Pyaar Hai that I can’t do action and dance. It’s a MIRACLE that in my 25th film, I’m STILL doing action and dance” – Hrithik Roshan