The Flagship Suite in business class and the new premium economy seat will debut in 2024 with Airbus A321XLR and Boeing 787-9 Dreamliner deliveries. In addition, American will retrofit its 20 existing Boeing 777-300ER aircraft beginning in late 2024 to include the Flagship Suite and the new premium economy seat while eliminating those planes’ eight-seat first-class cabins.

“The arrival of new long-haul aircraft and the customized seat design of the Flagship Suite seats will offer customers a truly private premium experience on our long-haul fleet,” said Julie Rath, the company’s vice president of customer experience. 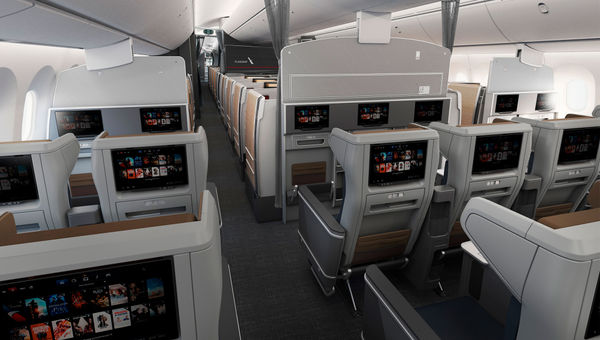 The 50 Airbus A321XLR aircraft that American has on order will offer 20 Flagship Suites and 12 premium economy seats.

American also announced Tuesday that it will do away with the A321 aircraft interiors that it currently uses for transcontinental flights. The so-called A321T has 10 Flagship First seats and 20 Flagship Business seats. American said those planes will be reconfigured to align with its existing A321s, on which the lone premium cabin is domestic first class.

The carrier said it will rely on Northeast Alliance partner JetBlue to offer transcontinental lie-flat seats from New York and Boston.